2015, what a year! From the Doughnut craze to obese burgers, the Brisbane Food scene has evolved leaps and bounds over the year. Here is a recap of our favourite dishes in 2015 (in no particular order).

The name says it all, a doughnut filled with an excess of Nutella. It was love at first bite. I literally have a solid relationship going with these doughnuts; most memorable moment of this romance was shamelessly sitting outside Doughnut Time one afternoon eating a six pack by myself.

This has been our go-to burger through out 2015. Between the two of us, we have probably ordered over 50 of these (that’s alot of pulled pork). Pulled pork, Chur BBQ sauce, red slaw, fennel mayo.

The dish that I have consumed the most of in 2015. These wings are heaven. Crispy chicken wings with hot sriracha. Yes, they burn your mouth, but they are so damn good! I eat them once a week; the spice in my life.

We have tried out a few variations of Jalapeno Poppers in Brisbane and Mighty Mighty is still our favourite.

2015 was the year I discovered the wonderful pairing of feta and chips, served with perfection by the Yiros Shop.

Traditional Yiros right here in Brisbane. A fresh pita with juicy pork, tomato, red onion, tzatziki, and chips (the added chips topped it off for me). Ask for their special sauce too, it takes the humble yiros to a whole new level.

Grilled Hervey Bay scallops dressed with Spring citrus & chilli. Every bite of these was heaven. The scallops melted in my mouth and worked a treat with the hit of chilli, perfectly cut through by citrus.

If I were stranded on an Island, and had a choice of food to live off, Ze Chips would be source of sustenance . Ipa beer cheeze sauce, maple smoked bacon & zp sauce on crispy fries. These are unlike anything I have had before. Definitely not your ordinary serving of fries.

The best $5 we have ever spent. These complete life. Crispy, sweet potato fries with added cinnamon.

One of the best burgers I have had this year. Marinated thin sliced beef, with mesclun, Spanish onion, tomato, cheese, soy sauce and bean paste mayo all on a brioche bun (They also have the best brioche buns in Brisbane).

The pie to order from the king of pies (Matt Roman). Everything I ever dreamed of in a humble pie; Oh, and a rib on the top. What more could a gal ask for?

$4 is a small price to pay for happiness if you ask me. 2015 was the year we officially labelled I Heart Brownies the best in Brisbane. No regrets there. That gooey centered goodness though.

Okay so I know guac and corn chips aren’t exactly what comes to mind when you think of an outstanding dish! But seriously, those corn chips are the bomb! Yes, I just said that. The flavouring they add to them is amazing. Would recommend with cocktails.

This is for all Vegans out there. The best eggplant dish I have ever had; flavoursome and buttery. If a carnivore like myself, could salivate over this dish, then you know it was amazing.

Vanilla cake, coconut ice cream, mango sorbet & Italian meringue all in one grand dessert. Not only does it look amazing, it tastes just as good. I would recommend sharing it between 2 people though.

They do one dish, and they do it so damn well! Their steak is perfection; every bite melted in my mouth. And bottomless fries are always a good choice, always.

Them balls though mmm. Greek hazelnut chocolate drizzle doughnuts with crushed walnuts. The doughnuts are light and fluffy and the chocolate is creamy, enough said.

It’s not a combination that you see everyday, but it works. One of those unexpected dishes which wowed us.

My review for Mighty Mighty, will be slightly bias, as before I  tried their new Spring Menu, they were already my favourite place in Brisbane. They are my go to place, I pay them a visit once a week without fail.

Okay, so we were given $100 to spend and this is what we chose: Original Wings, Sriracha Honey & Garlic Wings, Jalapeno Poppers, Cajun Fried Macaroni & Cheese, Steak Frites & Alcoholic Ginger Beer. All this only costed us $75, which is not bad if you ask me.

The Original Buffalo Wings are served with Blue Cheese Sauce. They were slightly spicy but juicy with every bite. I reckon I could have eaten two servings of these quite easily without getting bored. The Sriracha Wings were as amazing as they always are. Crispy goodness with that slap of heat from the Sriracha but the sweet goodness from the honey. This is my favourite dish of all time! I would eat it every day if I could.

The Cajun Fried Mac & Cheese, is one of the new additions onto the Spring Menu. I made a rookie error and tried this dish after having the Sriracha Wings, at which point, my taste buds were numb from heat. However, the concept of the dish was amazing. I would recommend eating this first before the other options on the menu. 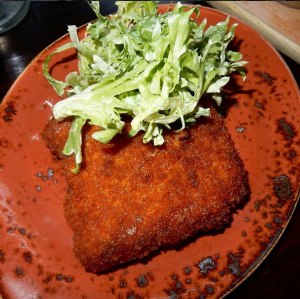 Moving on to the Jalapano Poppers, ahhh amazing. That is all I have to say. They are officially the best in Brisbane! I have tasted a fair few Jalapeno Poppers in my time, and Mighty Mighty has the best cheesy ones, the bacon tops it off, adding a smoky, salty element to the starter. These are also served up with Blue Cheese sauce, but taste equally as delicious eaten alone.

Those Steak Frites though, the best in Brisbane. They are lightly battered and fried until crunchy. They are then topped with a smoky paprika salt that is heavenly! I would recommend dipping them in Blue Cheese Sauce for an extra wow effect! 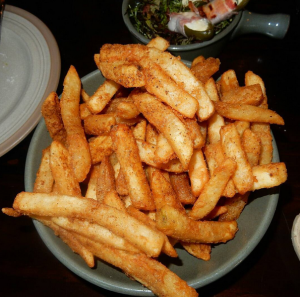 Check out their full menu here. 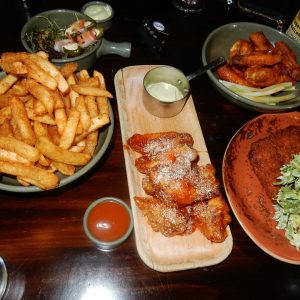 The colder weather calls for extreme comfort food. As you may already know, we love all things fried and greasy and so it is only natural that we compile a list of our favourites.

If you love your fried chicken as much as I do, Mighty Mighty should be your go-to place. Offering a variety of fried wings priced at a reasonable $12 for 8. These babies are sure to hit the spot. My personal favourite is the Sriracha, Honey & Garlic wings; perfectly crispy with a hot sauce that packs a punch. They are so delicious I cannot stay away from them. Will not lie, I have these at least once a week. 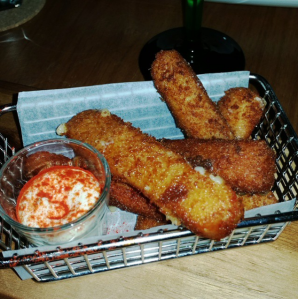 Located at Garden City Shopping Centre, the Palms Bar & Grill offers a reasonably priced menu with something for everyone. The Traditional Croquettes on their menu are hard to pass up. These little gems have Machego and Jalapeno and are served with Chorizo Aioli. Yumm! Got to love a crispy croquette with a gooey center. I would highly recommend trying out these addictive treats priced at a reasonable $14.

The Boast Shed has taken the humble fish & chips and turned it into something spectacular. Beautifully presented and equally as delicious; this has got to be one of our favourite fish & chip stores in Brisbane. I would highly recommend adding in the calamari to your meal. 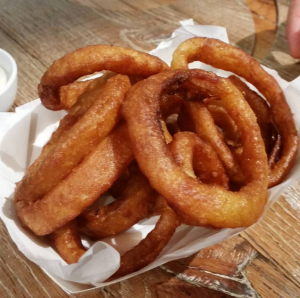 Home to Brisbanes’ New York style 18 inch pizza, the Boroughs also cooks up the most amazing Onion Rings. Perfect, crispy Beer Battered Onion Rings priced at a reasonable $5.50 with a delicious dipping sauce. Next time you are at Westfield doing the  groceries I would highly recommend getting a serving of these to snack on. 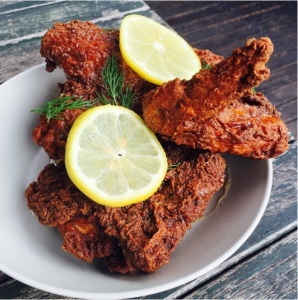 A&C never disappoints! If you out with friends try out their Basket of Crispy Fried Chicken. Lemon dusted with spiked Tobasco Honey this dish is pure bliss. I will be honest, this serving was huge and we could not finish it between the two of us. Priced at $24, this is comfort food at its’ finest.